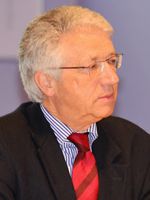 Wolfgang Petritsch, currently Ambassador and Permanent Representative of Austria to the OECD in Paris, was from 1999 to 2002 High Representative of the International Community for Bosnia and Herzegovina, he was the Special Envoy of the EU for Kosovo and EU Chief Negotiator at the Kosovo Peace Talks in Rambouillet and Paris. He wrote and co-authored several books that were translated to many languages. He is also the author of articles in edited volumes and international magazines.