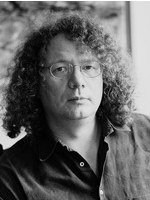 Ingo Schulze, born in 1962 in Dresden, lives in Berlin. After his studies in Classical Philology in Jena, he worked as a dramaturg and newspaper editor. Already his first book, 33 Augenblicke des Glücks, published in 1995, earned him critical acclaim as well as popularity with the readers. His following book, published in 1998, Simple Storys (title of the English translation: Simple Stories) was a great success and is read in schools. His 2005 novel Neue Leben (New Lives) is considered as his magnum opus. He wrote two more short stories collections (Handy, 2007, and Orangen und Engel, 2010) as well as two novels (Adam und Evelyn, 2008, and Peter Holtz. Sein glückliches Leben erzählt von ihm selbst, 2017). For the latter, he received the Rheingau prize for lilterature and was one of the nominees for the German Book Prize. His other publications include collections of speeches and essays. His works have been awarded international literatur prizes and translated into 30 languages.