As part of the series German October – Tetori gjerman, the author Meral Kureyshi, who has been living in Switzerland since 1992, embarked on a very special literary tour. Supported by the Swiss Cultural Council Pro Helvetia, Traduki, the Swiss Embassy and the German Embassy, she presented her widely acclaimed novel Elephants in the Garden.

The novel was published recently in Albanian translation and talks about a life marked by migration and torn between belonging and alienation. The literary road trip kicked off on 14th October 2019 in Tirana, where the author was joined on stage by translator Enver Robelli and Albanian writer Arian Leka, who took on the role of moderator of the evening at the Tirana Times Bookstore. The journey continued by car – how else – over hills and borders. The second reading was held in Prishtina on 16th October at Qendra Multimedia, the third, a home game for Kureyshi, on 17th October in Prizren, her place of birth. Thus, this chatty road trip ended as so many others do – at the very beginning, exactly at the same spot, where Meral’s own story first began. 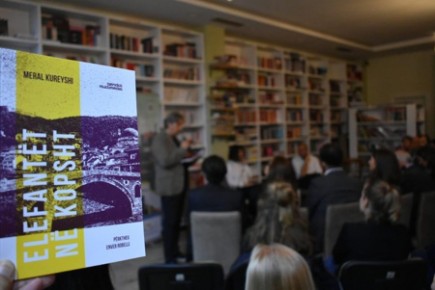