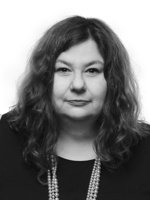 Natasa Vukajlović-Fischer, was born in 1968 in Belgrade. After finishing her law studies in 1992, she moved to Cologne. Her published translations from German to Serbian include works by Jenny Erpenbeck and Robert Seethaler. She translates plays, poetry, and children’s literature from Serbian to German. She also worked as a translator for the German radio station Deutsche Welle. Nataša Vukajlović-Fischer lives in Cologne and works for the radio station Westdeutscher Rundfunk (WDR).