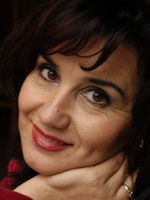 Anrila Spahija (Ana Kove) is considered as one of the best known contemporary Albanian writers. She studied Albanian language and literature in Tirana. In 2001 she concluded a study of German as a foreign language at the Goethe-Institut in Germany, and continued her studies on a master’s degree in Media and Intercultural Studies at the Viadrina University in Frankfurt (Oder). She is author of several books of poetry, including Shën Valentin ku ishe, Djegë Ujërash and Nimfa e pemës së humbur, as well as of translations from German. Her translation, supported by TRADUKI, of Paul Celan’s Mohn und Gedächtnis was met with special attention in Albania. Texts by Herta Müller, Sarah Kirsch, Rose Ausländer, Marie Luise Kaschnitz, Bertolt Brecht and Ingeborg Bachmann in her Albanian translation have been published by various literary magazines. Anrila Spahija (Ana Kove) received several prizes for her works.