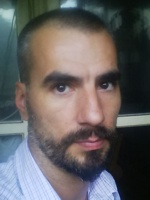 Đura Miočinović, born in 1979 in Belgrad, studied Romanian language and litereture at the Faculty of Philology in Belgrade. He earned his Master’s degree at the University of Timișoara in 2006. Already during his study years in Belgrade, he started translating literary texts for magazines. He continues to translate essays, theatre plays, novels, short stories and history books for renowned Serbian publishing houses. Đura Miočinović translates from Romanian and English into Serbian. He has been a memeber of the Association of Literary Translators of Serbia since 2015.