Three Days of US AND THEM 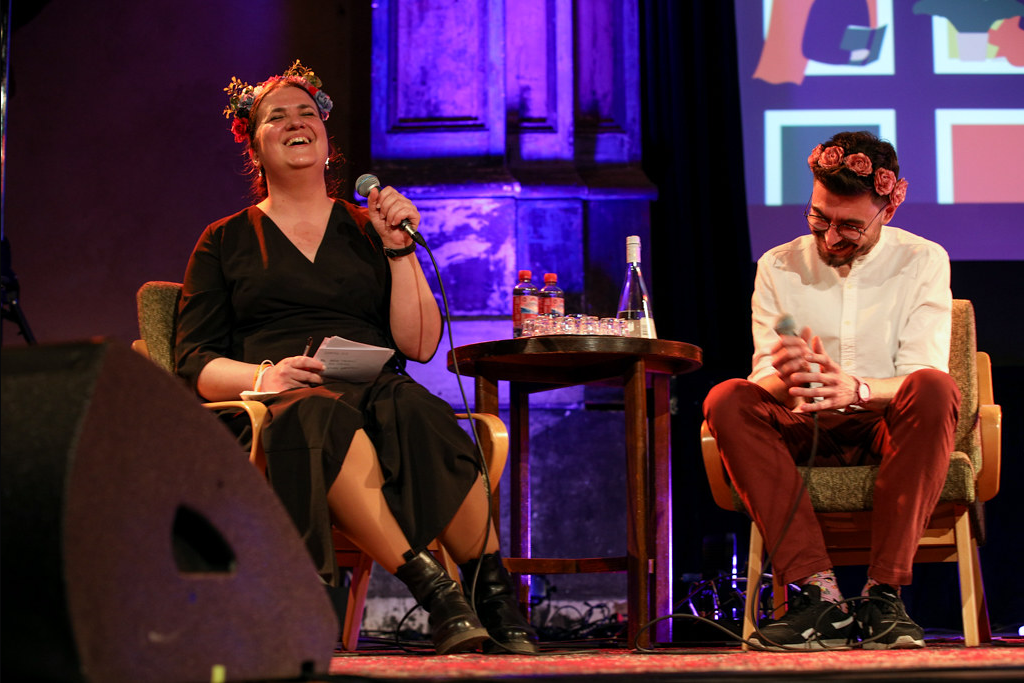 “When I pronounce the word Future,
the first syllable already belongs to the past.

When I pronounce the word Silence,
I destroy it.

When I pronounce the word Nothing,
I make something no non-being can hold.”

At last! After three years we finally had a chance to present the Common Ground programme in Leipzig. Even though in 2022 we were still could not be in the halls of the Leipzig Book Fair, our US AND THEM programme found a temporary home at the inviting UT Connewitz. The opening on Friday evening featured Norbert Mappes-Niediek, Manuel Sarrazin and Ralf Beste, who discussed the reasons why the West does not understand the East, of course also in light of the current political situation. The evening was moderated by Ulrich Ladurner.

On Saturday morning, Ismar Hačam talked with Ivana Bodrožić about the limits and fluidity of sexuality, gender and how different societies deal with these phenomena.

The poets Marianna Georgieva and Luljeta Lleshanaku, moderated by Tino Schlench, then presented their current poetry collections in German translation, ausweg and Die Stadt der Äpfel. In their poems we travelled far beyond the city limits of Leipzig, all to the bitter cold of Antarctica and beyond, and delved into a myriad of philosophical worlds.

Petar Andonovski’s novel Fear of Barbarians opens with a group of refugees landing on the coast of the Greek island of Gavdos. They are scientists from Chernobyl. The novel, which is in part inspired by true events, feels strikingly topical due to this random streak of synchronicity. With him on stage was Miha Mazzini, who in his book Du existierst nicht describes the moment after war is over and dust begins to settle. He depicts what happens when people fall victim to politicized bureaucracy – and identities get simply erased. His novel too, is based on real events. Both novels are connected through the theme of loss and the fight for one’s identity.

At the Balkannacht we featured five literary voices: the Albanian writer Lindita Arapi, Tanja Stupar Trifunović, who dissects a mother-daughter relationship in Die Uhren in Mutters Zimmer, Stefan Bošković, who in his novel Der Minister turns himself into a loathed character, Tatiana Țîbuleac, who in Der Sommer, als Mutter grüne Augen hatte explores (and mends) a broken mother-son relationship, and the young poet Radmila Petrović, who at the end of her talk emphasised that perhaps the mountains are the only thing her country can lay claim to, but mountains are steady and unwavering, and nothing can tear them down.

To top it all off the Pantaloons played us out and brought the UT Connewitz to its feet. The livestream of the evening, including the concert, can be viewed for another two weeks.

Batteries recharged we started the Sunday morning full of optimism and glee: Alongside moderator Annemarie Türk, Barbi Marković and Ana Schnabl discussed botched up times and their masterpieces, life in Belgrade in the 90s and in Ljubljana in the 80s, mere existence as nothing but a brutal video game and writing as an auto-erotic practice. Last but not least we escaped with Georgi Gospodinov into the past and into the warm cozy comfort of nostalgia. Together with Jörg Plath he presented his latest novel Zeitzuflucht.

An then, just like that and before we knew it, it was all over again, and the future was in the past. But US AND THEM, we stand together, and just like mountains we are steady and unwavering.

We would like to thank the authors and moderators who participated in the programme and especially the translators and interpreters who make literature travel and escape its small confines. Our deepest gratitude to the Leipzig Book Fair and the UT Connewitz.

Our digital programme (with Lavinia Braniște, Aleksandar Hemon, Nataša Kramberger etc.) as well as selected recordings of the live events are available to view on our YouTube channel:

The End of an Era